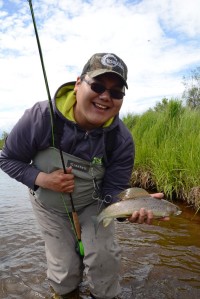 I had my head down puzzling over the schedule for the upcoming days (we often rearrange the schedule to accommodate weather, topics of particular interest to the students, and availability of our “guest speakers”) and glanced up to see David coming down the path with a big grin.  He’d just gotten back from the first fishing outing of the Academy.

“Heck yeah, I did,” he said smiling ear to ear and holding up his hands to show me how big.

It was VERY respectable for his first time fishing with a fly rod.

The camp was buzzing for the rest of the afternoon.  Nearly all the students had caught at least one fish and were exchanging ideas on what flies worked, or didn’t; joking on how important the knots were to landing the fish; sharing with their peers where they found the willing fish and of course, embellishing things just a little bit…(they are after all fish stories).

It’s the point of the Academy I look forward to every year.  A tipping point – a switch is flipped and the students go from interested to full-on sucking up information like a vacuum.   It’s when they become officially hooked.

With some help from former ADF&G biologist and Academy instructor, Dan Dunaway, David lands a nice rainbow.  Of course, the camera man was on the other side of the river when he caught the big one.

Up Next:  Preparing for Client Day