It was a little bit difficult to convince the kids to agree to a 7:00am breakfast… until we told them there was a fly-out planned for the day.

Students divided into two groups, taking turns heading out to the Newhalen river and then taking an Iliamna Air Taxi float plane to the Tazimina River 20 miles north of the host lodge in Iliamna. 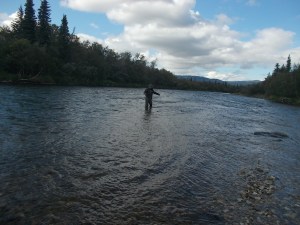 At the end of a long day on the river, the kids shared a few high and low-lights from the day: 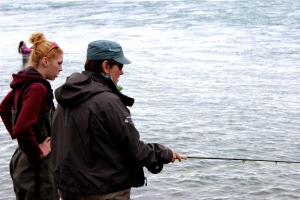 As the kids have headed out to the river each day, a science team from University of Washington has also jumped in a helicopter and headed out too, also staying at Red Quill and coming together to share stories in the evenings. After dinner (of student-caught salmon), instructors talked the science team into telling the kids about their field studies of collecting data on fish species in Alaska. Students’ fish identification skills were tested and some of them seemed to have a knack for fisheries biology.

Client day is looming and students are preparing to bring around a community member of Iliamna for a day on the water. They shared with me a few critical lessons they’ve learned in preparation for Sunday: